So if reading my past post on the Original I mentioned I was doing a clone of this. Been in the keg for 9 days now so a bit young....

Colour - clone is darker but not cleared yet, only 9 days since going in the keg and also suffering from chill haze.

Aroma - tangerine much more pronounced in the original.

Taste - more malty biscuitness (new word ?) in the original all the way through*

Body..bit more body on the original, not a lot but noticeable in a side by side.

What I'd do different next time.....just some small tweaks really. Increase the mash temp to 68c, use a lighter crystal or caramunich, add bit more base munich and for more aroma increase the flameout addition and dry hop.

* Otherwise I'm really happy with this, being so young I might have to update this as the malts will no doubt shine more though in a couple of weeks.


Posted by BeerHunterCPH at 21:19 No comments:

I'm bringing this one up in the queue as last weekend I was brewing a clone of the previously posted German IPA .

Upon pouring this brown ale there is not a huge aroma coming off this. I get toffee , chocolate raisins and cherries.

In the mouth the rich taste of the combination above in the aroma but with some nuts thrown in. Medium bodied and finishes moderately bitter and quite surprisingly more to the dry side of the scale. A lingering aftertaste of acidic cherry and slightly nutty. 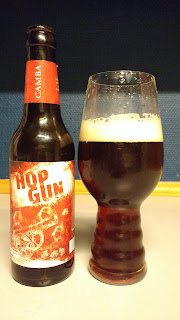 A weird one..I've had a few bottles of this before, sometimes I thought it was excellent and other times not so much. I'm positive the last bottle I drunk had more hop presence but hey ho. Certainly not one I could drink a lot of as the toffee aspect of this would become cloying after two.

This is ending up at 6/10 from me, possibly could go a bit higher if tasting a fresher bottle.

Posted by BeerHunterCPH at 21:32 No comments:

Rather than the blog name suggests this is going to turn into more like beer I am drinking or brewing just now CPH. Nowadays, instead of looking out for and paying a fortune for a new hard to get beer I tend to pick and choose what I buy. It kind of goes hand in hand on what I am trying to achieve on a coming beer that I have in mind to brew up.

This one comes up as I have over a half a kilo of Centennial hops in my fridge and any other Founders beer I have tried has been spot on, be it their breakfast stout, porter, pale ale, curmudgeon or all day ipa, which I plan to touch on again at a later date. It was either this or a rare around here Bells two hearted for a heavily laden centennial brew. Enie minie miny moe...I plumped for this and saving the Bells for a later date....

Pours a hazy orange while a dank earthy mild citrus sweetness greets my nose with some zest and caramel hidden in the background.

The same earthy dankness in the mouth with light citrus, pine and florals. Finish and aftertaste are sweet and bitter, especially the bitterness in the aftertaste lingers on. Not mouth puckering bitterness but you can feel it is there.

I really hate when people say 'well balanced' as the term has been taken over by utter knobheads but it applies to this, sweet malts perfectly balanced by the bitterness. This has become a staple in my fridge as it is widely available as is the afore mentioned all day and pale ale. If I had not tasted this before I would give it a generous 9/10 on the IPA meter. 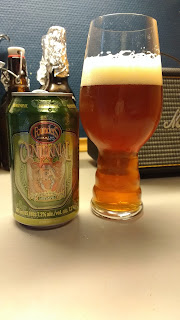 So I had a good look around the internets for this clone recipe. I think it was on homebrewtalk so credit goes there. I am brewing this at easter though confusion seems to reign on if this is all centennial or there is also cascade in it, I'll go all centennial.

It will be fun to do a comparison at a later date.

German craft beer ? Very much alive and underrated so far, though some breweries have a good recognition like BrauKunstKeller to name one. I came across Camba in my local supermarket one day and have tried a few that were available. At the time I was looking for something different away from hop forward American style and this one stuck, along with one other that I will post on later. The Black Shark 'imperial black IPA' which I have also tried got an immediate thumbs down even though it tasted ok. I refuse to recognise that category...total nonsense as touched on in my last post.

Anyway, on with my thoughts on this one. Afterwards my stab at a clone recipe which I will be brewing up at the weekend.

Hazy orange colour and sweet on the intake with dominant mandarin, a light biscuit and earthy light spiced background while finishing semi dry. Smooth medium bitterness for an IPA. A short aftertaste is left with, for the brits reading....you know when sucking on a locket throat lozenge and you bite through to the honey center, well that's it ! A light lemon honey with a slight touch of menthol for those that have not had the pleasure.

This has a light body and mouthfeel with a medium carbonation. Overall, I like it as it makes a pleasent change. While not a mind blower I will give this a 7/10 on the beerometer. 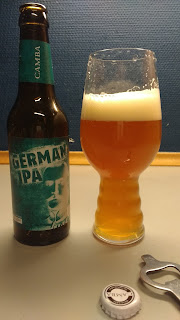 I am attempting something similar to this at the weekend and their website gives lots of good detail of what they use, so this is what I have come up with for version one. I am unsure if this is dry hopped or there is a whole heap at flame out as the aroma on the bottles I have tried are not in your face with a fresh bottle. Into the deep end, I am going with what I have in stock....

I'll do a comparison when it's ready. Thanks if you made it this far. Peace, I'm outta here.


Posted by BeerHunterCPH at 20:12 No comments:

I've been kinda busy, a lot has changed and two years have passed. It was only today that a reader left a comment on a beer which woke me up to the fact that I'd totally forgotten to update this blog while being on my own brewing adventure....

I was always meaning to journal my travels as a complete novice to where I am now, which I would say is competent, as you never stop learning. The idea was perhaps uploading brewing videos to youtube though I never did get around to it.

In a follow up to my last post 2 plus years ago...I did eventually move to all grain brewing. Funnily enough, I'm moving away from a three vessel system and have a brew day planned for tomorrow on a new shiny piece of kit I just bought, The Grainfather, to simplify my brewdays.

With that in mind I will start to blog again as my interest in good beer has not waned. Continuing on the blog will be more about brewing related while chucking in a beer review or two.

I wish I brewed before starting this blog as the nerdy side of me likes to deconstruct a beer I am drinking guessing what malt and hops are used.....without sounding like the bearded* weirdo standing at the bar with the one thousand yard stare contemplating what they are drinking and basically talking out their arse. Them and bloody beer hipsters do my brain in !

*caveat note, not all with beards standing at the bar are weird, some are though so be aware on approaching !

Having a greater understanding of what flavours each malt and hop brings to the beer  has changed my perception greatly, never mind what yeast alone can do.

Two years have flown by and the local beer aisles have changed greatly, including the ever increasing pricing. I now have a tendency to look at a beer and say 'sod that, I make better beer at home'. Others I will pick up and buy, recently i have a thing for German IPA's, a few of which I will post about in the coming weeks. One of which I will also try to clone.

So with this return from the dead why not leave with a small rant. Black IPA, think about it Black India PALE Ale......No, I'll be here for hours keyboard bashing.

I'm outta here.
Posted by BeerHunterCPH at 17:21 No comments: